Banku singer, Mr Eazi has called out the annual award body, Headies, through its media platform, HipTV, for not fulfilling their part of their agreement when he won the award of Next Rated Artiste for the 2016 session of the Award ceremony, by giving him the car that was meant to accompany the award.

This news was made public via Twitter on Sunday, the 24th of November when the media platform, HipTV, commented on Mr Eazi and Temi Otedola’s photo on Twitter and he replied to their post by saying;

Instead, make u gimme my car u dey here dey tweet couple goals 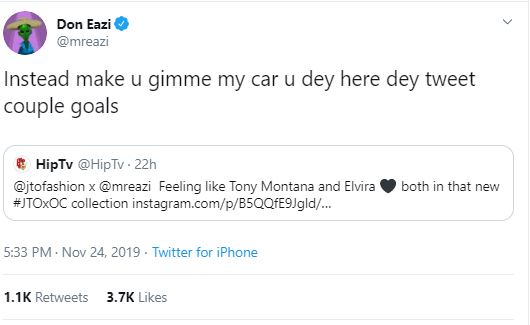 1,387 people are talking about this

The award body is yet to respond to Mr. Eazi’s tweet but what is funnier is the reactions this tweet produced. See below;

U mean that next rated car ? since… As in that night wen u called Wizkid the biggest African artiste ever

Headies and SiWES allowance gat something in common…..

Wawu, so @mreazi has not collected his car yet after winning next rated since 2017. Na wa oooooo. @The_Headies @HipTv how far na

Nana Kwasi Baiden also known as "Kwasi Blogger" is a Blogger, Promoter, Web Developer, Brand Advertiser and Content Writer, but I don't just write about the celebrities alone, I am one of the internet gossip phenoms that breaks hot news at the right time just when you need it. Call or WhatsApp: 0553801214